After Re-Animator, for which Empire Pictures offered post-production services, Stuart Gordon became a regular director for the company. He made Dolls and From Beyond almost back-to-back. Dolls was a treatment that had already been written for Empire, and when Gordon was allowed to dig through a load of available concepts, it was the one he settled on, seeing its potential as a kind of adult fairytale. Even though the film was released after From Beyond, it was actually shot first. Dolls is a unique sophomore effort as it’s a completely different movie from Re-Animator with a mostly different cast. It’s not what we think of as a Stuart Gordon movie by any stretch; not full of familiar faces and there’s barely any gore at all.

From Beyond helped to cement what we think of as the director’s style. There are more recognizable faces from Re-Animator, particularly Jeffrey Combs and Barbara Crampton. But this time their roles are reversed–she’s the mad doctor and he’s the one being victimized, in completely over his head. It helped to showcase the range of both actors, and solidified the notion of Gordon’s recurring stars as a kind of theater troupe. They would appear often in his movies, but the roles would never be all that similar, which makes sense given Gordon’s background as a theater director.

After From Beyond, it seemed like the world—at least, the Empire world—was Gordon’s oyster. In the time between the release of that film in 1986 and Dolls the following year, Gordon announced a number of different projects, most of which never saw the light of day. We had a voodoo thriller called Gris-Gris—which, from the sounds of it, kind of became Full Moon’s Netherworld—and an adaptation of H.P. Lovecraft’s The Lurking Fear, which Gordon wanted to do as a kind of throwback detective story. And then, arguably most intriguingly, there was Bloody Bess. 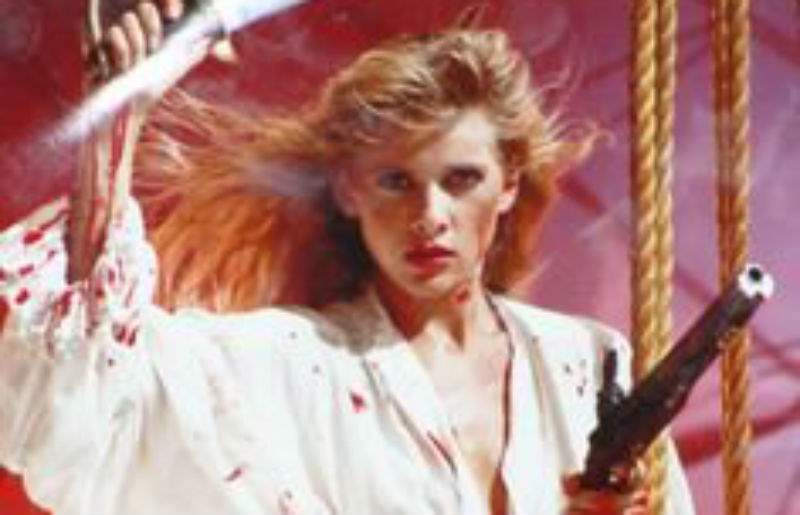 On just about every level, Bloody Bess was going to be an entirely different movie from any Gordon had made before. It would have been especially different for its planned star, Barbara Crampton. Gordon had made two movies with her already at this point and the planned third would have truly showcased both of their talents in a way that hadn’t been seen before. After three trips to the realm of sci-fi and horror, Gordon wanted to try his hand at a swashbuckling adventure—no doubt still infused with that Empire flair.

Bloody Bess was planned as a pirate movie, with Barbara Crampton as the titular antihero. The idea of Crampton as a hard-edged, hard-drinking pirate showing up her male counterparts is endlessly appealing. According to Gordon, in an interview in The Bloody Best of Fangoria #6, Crampton was incredibly excited at the prospect of taking on this role. “She’s very happy about that,” he said at the time. “She’s a perfect choice for the role. Empire is signing her to a three-picture contract. We sat down the other day and tried to figure out exactly what a Barbara Crampton movie is, and decided that it should be a movie where she goes through a transformation, like she does in Re-Animator and From Beyond. Where she starts out as one thing and becomes another by the film’s end. Bloody Bess is about this very proper English girl who is kidnapped by pirates and ends up becoming their leader, sort of a swashbuckling version of the Patty Hearst story.”

Patty Hearst was, of course, the infamous daughter of William Randolph Hearst, who was kidnapped by the Symbionese Liberation Army, a domestic terrorist group. She wound up becoming a career criminal herself, eventually going to prison for bank robbery, though she was later pardoned by Bill Clinton.

There’s a lot to unpack from Gordon’s quote, first and foremost that there were actual meetings to sit down and determine what a Barbara Crampton movie is. That’s incredible in itself. And he’s right, of course, Crampton had specific, transformational arcs in those early films, particularly in From Beyond. The notion of her starring in this origin story of a quiet, reserved girl who becomes a pirate queen makes it an absolute shame the film was never made.

With Jeffrey Combs naturally tapped to co-star, Bloody Bess was planned for a 1988 release, while Gordon was simultaneously still trying to raise the funds for his long-gestating Shadow Over Innsmouth. A promotional photo shoot was even captured, with sales art depicting Crampton as the pirate queen. Sadly, that’s as close as we ever got to seeing the movie, though at least we got to find out what Crampton would have looked like as the lead in a pirate film.

As for what happened to Bloody Bess, it’s a little unclear. It was one of a dozen announced projects from both Stuart Gordon and Empire at the time that never came to pass. It’s possible the director and star simply got caught up doing other things. But it’s much more likely that the timing of the planned production was a factor in its demise. 1988 was Empire’s last year, and a lot of projects that were on the slate never materialized, especially in-house efforts as big as this one was planned to be. Empire was making a lot of pick-ups at the time and less of their own material, which was never really what Charles Band envisioned for the company. They strove to create a unique blend of movies that specifically felt like a part of the Empire brand. But, by the end of the ‘80s, that became less and less of a reality. So, Bloody Bess likely was scrapped alongside countless other movies that Empire planned to make. As the studio dissolved in 1988, when Bloody Bess had been tentatively scheduled for release, Band started shifting gears to a new company, one which would cater to the video market rather than a theatrical market that was impossible to keep up with as an independent studio making very bizarre, niche movies. He created Full Moon Entertainment which, in some form, continues on today.

One of the most enticing rumors surrounding Bloody Bess is that Renny Harlin, a director for Empire at the time, saw the promo art and couldn’t shake the idea, eventually using it as the inspiration for his own blockbuster disaster, Cutthroat Island. That sounds fantastic and, on paper, plausible but I highly doubt there’s any truth to it, mostly because Harlin wasn’t an in-house director for Empire like Gordon, Ted Nicolau, and others were. His Prison was already mostly complete when Empire secured distribution for it. It’s entirely possible that he still saw the sales art in the Empire offices at one point, but we won’t ever know for sure.

What’s even more interesting is that, again, it does look like an Empire feature—unmade or not—wound up having a big budget influence. The story of a young British noblewoman who eventually transforms into a pirate queen is the exact arc of Elizabeth Swan in the Pirates of the Caribbean films. That sounds far-fetched and coincidental, but both Band and Gordon had a relationship with Disney. Band tried to partner with them many times through both Full Moon and his children’s offshoot Moonbeam. Gordon had an even greater working relationship with the mega-studio–this was around the same time he was hired to write Honey, I Shrunk the Kids, which he was also considered to direct. It’s absolutely possible that Gordon talked up this concept while working on that movie and it was just something that stuck in the minds of Disney execs.

Either way, Bloody Bess was going to be a Stuart Gordon pirate movie, a Barbara Crampton-starring adventure film, and on concept alone it will always be a shame that it never happened. Not that the actress still couldn’t easily pull it off today, of course.

Post Views: 1,086
Liked it? Take a second to support Nat Brehmer on Patreon!

Tags: Barbara Crampton, Bloody Bess, Horror Trivia, Jeffrey Combs, Pirates of the Caribbean, reanimator, script to pieces, Stuart Gordon
Share This Post
Written by Nat Brehmer
In addition to contributing to Wicked Horror, Nathaniel Brehmer has also written for Horror Bid, HorrorDomain, Dread Central, Bloody Disgusting, We Got This Covered, and more. He has also had fiction published in Sanitarium Magazine, Hello Horror, Bloodbond and more. He currently lives in Florida with his wife and his black cat, Poe.
Have your say!
00
Previous ArticleHere’s Another Shot From Three From Hell to Tide Us Over ‘Til the Trailer ArrivesNext ArticleBehold, the Stunning Trailer for Ari Aster’s Midsommar is Finally Here
You May Also Like Ten Things You Might Not Have Known About Rosemary’s Baby
June 10, 2014

Script to Pieces: Beyond the Valley of the Texas Chainsaw Massacre
October 4, 2018

Five Unsung Movies From an Unsung Director: Stuart Gordon
December 16, 2014
FOLLOW US:
Support Nat Brehmer on Patreon!
There are no goals in this campaign...