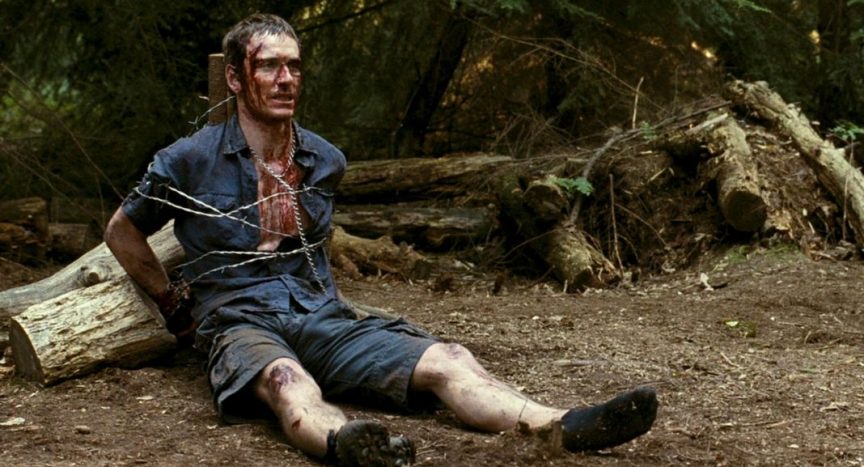 It’s not just a slasher horror film, it’s much darker, smarter and more disturbing than that.

A pleasant middle-class couple Jenny (Kelly Reilly- Sherlock Holmes) and Steve (Michael Fassbender- Inglourious Basterds) intend to have a short and sweet break at a remote lake enclosed by woodlands. The peace is soon disrupted a gang of obnoxious young teenagers, led by Brett (Jack O’Connell- Skins TV Series), who revel in provoking the adults and shattering their peace. When Steve confronts them it just riles up the teens more with the disputes becoming more nasty by the minute, eventually leading to outright violence and bloody confrontation, with little hope for any redemption for either side.

Jenny and Steve are likable characters. You don’t want to see them suffer or be humiliated and harmed. Their actions and decisions are reasonable and believable, but so too sadly, are the things that happen to them.

The acting is well done by all, particularly Michael Fassbender whose character Steve is real and heart-warming, and Jack O’Connell plays the psychotic teen leader very well.

The film is fast paced with a well-developed narrative that is frustrating, exciting and tragic all at once.

Eden Lake deals with a very prominent and real threat in the form of a group of antisocial youths that many of us find all too intimating at times. It depicts a world that is strikingly relevant to the one in which we live, making the film that much more disturbing.

The line “they’re just kids” is unfortunately not always the case. If you like slasher movies and films like The Last House On The Left and I Spit On Your Grave, you’ll enjoy Eden Lake.

Post Views: 1,599
Liked it? Take a second to support Nicola Odeku on Patreon!

A Nightmare on Elm Street was Inspired by These Terrifying Real-Life Events!
November 19, 2019
FOLLOW US:
Support Nicola Odeku on Patreon!
There are no goals in this campaign...