Five years ago, the idea of a brand-new Chucky film coming along to reinvigorate the assumed-dead franchise would’ve been inconceivable. But 2013’s lively, and impressively dark, Curse Of Chucky did exactly that, pitching Fiona Dourif’s (daughter of Chucky himself, Brad Dourif) wheelchair-bound Nica against the killer doll in a battle of the wits located mostly in an expansive, isolated mansion.

Cult Of Chucky sees Nica, the soul survivor of its predecessor, return but first off, we have to check in with Andy who, as you’ll recall, shot Chucky in the face during a post-credits sequence last time around. Refreshingly, the flick picks this plot strand right back up, with Andy having (hilariously) mounted Chucky’s severed head on a wooden plank, so he can torture the sucker any time he gets a bit mouthy (which, let’s face it, is all the time).

Immediately, series creator (and returning writer-director) Don Mancini lets us know that this is going to be dark–darker even than Curse, which turned certain fans off due to only referencing its goofier, Bride/Seed connections in the movie’s final moments. We catch up with Nica as she’s being relocated to a mental hospital, where her recovery, and eventual understanding of her “crimes”, can continue in peace. 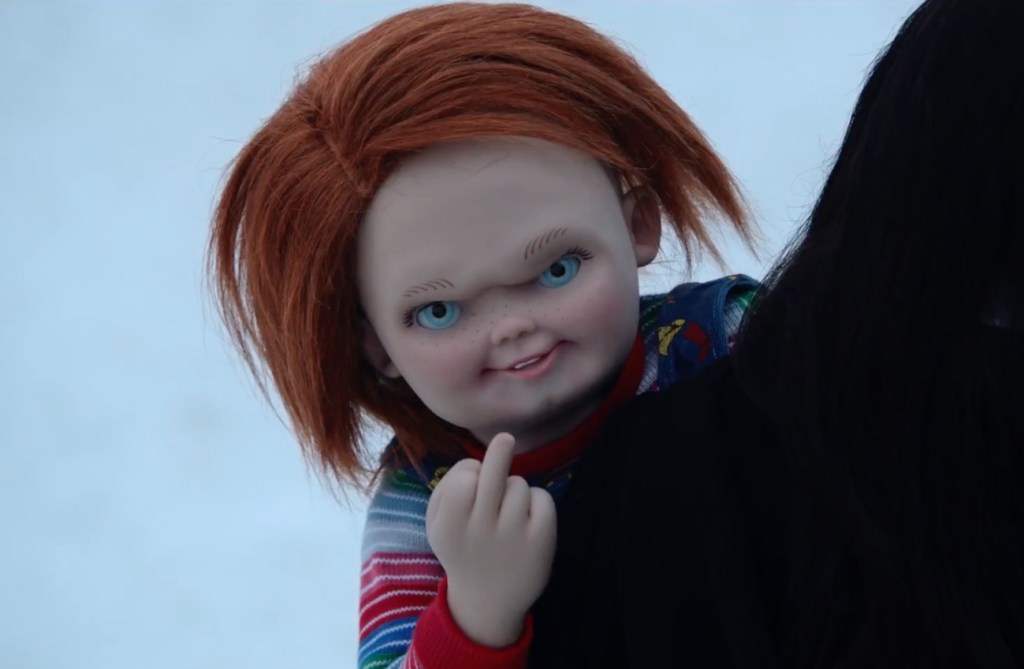 Dourif is a hugely interesting screen presence once again, smiling just like her father in that weirdly creepy, lopsided kind of way. Her Nica is empathetic but not a victim, firing back against her doctors and fellow patients alike when they refuse to heed her warnings about that harmless doll purchased, of course, “in Hot Topic” (just one of Cult‘s killer lines). When Chucky does show up, he pops even more against the clinical all-white of the facility.
Love Real Life Ghost Hunting Shows? CLICK HERE FOR MORE!

The puppetry and creature FX, from series regular and now associate producer Tony Gardner, are still spot on, the doll’s movements exhibiting just the right amount of stiffness. The addition of a couple extra dolls ups the stakes, but it’s worth noting that, were it just Chucky causing mayhem once again, little would be lost with regards to tension or scares. If anything, more Chucky wouldn’t have gone awry (not to mention more Andy, who’s wasted).

Another character that could’ve stood to have a more significant starring role in Cult is the Bride herself, Tiffany, glimpsed just once in the backseat of a car, and her protector, Jennifer Tilly. Tilly, making her welcome return to the franchise following a delightful cameo last time around, is the movie’s most vocal proponent but is mostly relegated to the sidelines here. When she does feature, the incomparable actor is a firecracker. Mostly, though, this is Nica’s story and Dourif brings surprising depth and nuance to her character second time around. Mancini, too, flexes his creative muscles more in Cult, aided in no small part by returning cinematographer Michael Marshall, who makes the movie look much prettier than it has any right to be. Some very clever uses of split-screen further enliven the mostly single location proceedings.

Impressive of all, however, is just how gruesomely inventive this series continues to be, seven movies in–especially considering how Annabelle has stalled after just two. The kills are rough, the jokes just as quick and off-colour as always (Nica’s doctor tells her the idea of more dolls on the loose isn’t any “crazier than one doll”) and there’s a good mixture of classic and modern throughout, while the ending is a hilarious, teasing gut-punch.

It’s not perfect. The movie is a bit overlong and could’ve perhaps benefited from a tighter edit overall, while there’s an ongoing sense that this kind of thing won’t appeal to anybody besides hardcore Chucky fans. Thankfully, there are a lot of us, and considering there is definitely more to come (will the series make it to ten?) Cult Of Chucky, like Curse before it, serves as a great reminder that there’s life in the old doll yet. If we’re (un)lucky.

Post Views: 509
Liked it? Take a second to support Joey Keogh on Patreon!

Tags: brad dourif, Chucky, Cult of Chucky, cult of chucky review, Don Mancini, Fiona Dourif, frightfest, frightfest 2017, jennifer tilly
Share This Post
Written by Joey Keogh
Slasher fanatic Joey Keogh has been writing since she could hold a pen, and watching horror movies even longer. Aside from making a little home for herself at Wicked Horror, Joey also writes for Birth.Movies.Death, The List, and Vague Visages among others. Her actual home boasts Halloween decorations all year round. Hello to Jason Isaacs.
Have your say!
00
Previous ArticleScript to Pieces: Pascal Laugier’s Hellraiser RebootNext ArticleLeatherface is the Least Compelling Character in His Own Movie [FrightFest Review]
You May Also Like

Frightfest 2019 Opening and Closing Films Revealed
June 20, 2019
FOLLOW US:
Support Joey Keogh on Patreon!
There are no goals in this campaign...