In the scene that best captures the essence of Brazilian slasher film Skull: The Mask, a monster (Rurik Jr.) stalks toward a priest (Ricardo Gelli). The priest backs toward a crucifix. He takes Christ’s hand, at first it seems, for comfort. But the hand comes out and reveals itself to actually be a sword hidden in Jesus’s arm. The priest and monster proceed to have an epic sword fight in front of a stained glass background.

The movie starts long before that fight in 2021. Skull: The Mask opens in 1944, with soldiers that look a lot like Nazis conducting a ritual to summon Anhangá, a Brazilian god. They cut a man’s stomach open and bathe the titular mask—which looks like the skull of one of the pig things from the rancor pit in Return of the Jedi—in blood and entrails. One of the maybe-Nazis puts the mask on. The mask doesn’t like that. The maybe-Nazi’s head explodes. 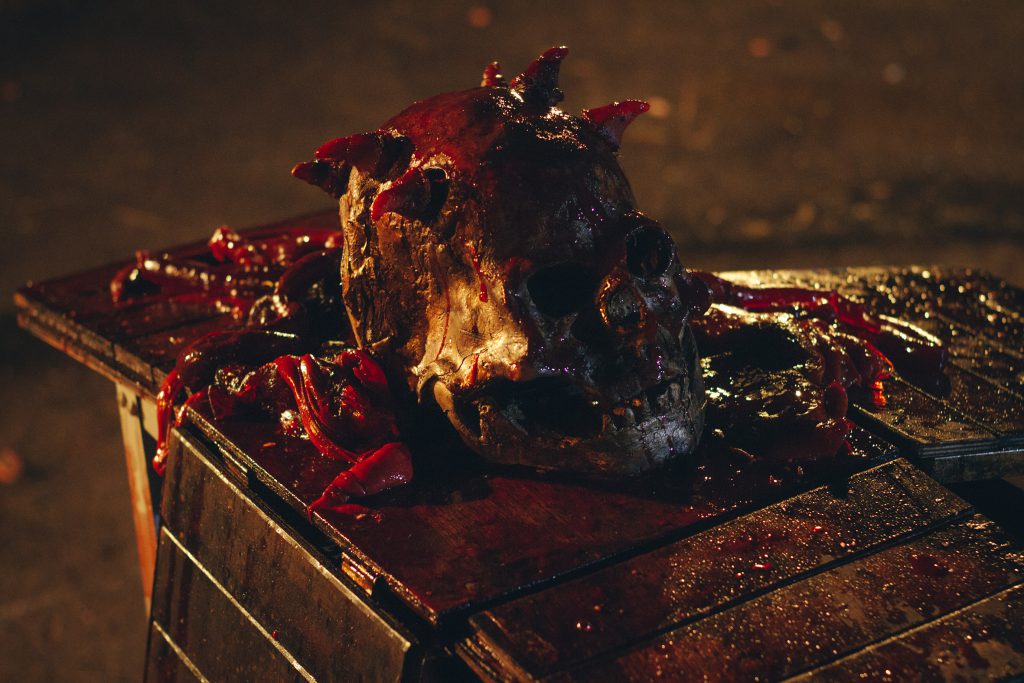 Fast forward to a little past the present day, 2021, and the mask is rediscovered. Prototypical corporate overlord Tack Waelder (Ivo Müller) sends Galvani (Guta Ruiz) to retrieve it when it’s discovered. Galvani takes it home to show her partner Lilah (Greta Antoine). Galvani fully intends to take the mask to Tack in the morning. Nervously, she and Lilah ask each other, “Are you afraid of something?” and laugh. After Galvani falls asleep, Lilah, who dresses like Death from Neil Gaiman’s Sandman, conducts a ritual to wake the mask up. She succeeds, but the mask doesn’t want to be worn. Instead, it kills them both.

Detective Beatriz Obdias (Natallia Rodrigues), who’s partner complains, “You said you shot that guy because he disrespected you” is called in. It’s not her department, but she doesn’t want to leave. Soon Tack is on the scene. He’s callous, telling Beatriz to butt out, “Look, they are dead now. I really think you should focus on that matter.” But shortly after he’s blackmailing Beatriz into finding the mask.

Those two aren’t the only one’s looking for it. Manco Ramirez (Wilton Andrade) works unloading fruits from trucks. He doesn’t necessarily want to be involved with the whole magic mask possessing and killing people, but it’s in his blood. His grandfather had a collection of magic artifacts that could fight Anhangá, but the aforementioned priest, Father Vasco Magno won’t give them to him, sneering, “500 years of history in your rented shack.” Being sundered from his cultural history doesn’t stop Manco from hunting for Anhangá. Notice here also, the not subtle symbolism of the Priest refusing to let Manco have his family birthright, his culture.

There are a lot of moving parts, but that’s part of what makes this flick so much fun. There’s an energy that jolts through everything in co-directors and co-writers Armando Fonseca and Kapel Furman put into it. Not all of it exactly makes sense or comes together, but it’s all so entertaining it doesn’t matter. They knew Skull: The Mask was a B-movie, and like all the best of B-movie directors, leaned into the weirdness and the exhilaration. How does the priest know how to sword fight? Who cares! It’s awesome.

The same goes for the music. In each individual scene it’s perfect. The opening credits roll with a synth-heavy rock song that would fit well with anything that Dario Argento played with Goblin. Later when Beatriz is one screen, muted trumpets bellow as though this were a noir film. For Tack, it’s a quiet piano. The different musical motifs don’t come together as well as the film, but they all work by themselves.

The SFX add to the chaos. The mask looks amazing, as do the other creature designs. The beginning is shot with a filter to make it look like damaged film from the 1940s. The gore is over the top, a la George A. Romero. No one will mistake it for a snuff film, but there’s a lot of blood being pumped into the scenes that have it. Which is, again, fun!

Maybe the best part of the film though is the fight choreography. Rurik Jr., who plays the monster, is a professional wrestler and it shows. In between decapitations and opening rib cages to rip out hearts, he’s hitting power bombs, chokeslams, and Ura Nages. Because of his wrestling background, he does strong work carrying himself with menace and whooping anyone who comes within arms length of him.

RELATED: See No Evil 2 is Better Than Its Predecessor [Review]

Skull: The Mask isn’t a perfect movie, but the rough edges are what makes its magic so potent. It takes all of the unkillable killer of slasher flicks, the chest-bursting sequences from the Alien franchise, the drama of professional wrestling, and a hefty helping of camp and mixes them all into one amazing package. The cherry on top is the way Skull: The Mask actively critiques the way Christian missionaries erased native cultures in Brazil. You’ll regret missing this one.

Skull: The Mask is debuting as part of the Chattanooga Film Festival, which is open to residents of the U.S. You can purchase tickets here.

Tags: B-Movies, brazilian horror, Skull: The Mask
Share This Post
Written by Ryan C. Bradley
Ryan C. Bradley (he/him) has published work in The Missouri Review, The Rumpus, Dark Moon Digest, Daikaijuzine, and other venues. His first book, Saint's Blood, is available from St. Rooster Books now! You can learn more about him at: ryancbradleyblog.wordpress.com.
Have your say!
30
Previous ArticleNew on Netflix: May 22nd, 2020Next ArticleThe Pandemic Anthology is Horror Spiked with Much Needed Humor [Chattanooga FF Review]
You May Also Like Welcome to Spring Break is a Lost ’80s Title That Should Stay Lost [Retrospective]
July 19, 2019 Why Critters 2 is the Perfect Easter Horror Movie
March 26, 2016
FOLLOW US:
Support Ryan C. Bradley on Patreon!
There are no goals in this campaign...