I Am A Hero Omnibus Volume 4 is a horror manga that revolves around Hideo Suzuki, a 35-year-old manga artist. Hideo’s life is unfulfilling, he has no future job prospects (he is stuck with a low-paying assistant job) and no committed relationships on the horizon to boot. However, when the world falls into an apocalyptic nightmare, where a disease turns regular people into insane zombies that are driven to kill and devour those nearest to them, Hideo grabs a shotgun, teams up with strangers, and they try to make their way to Mt. Fuji to be saved.

In I Am A Hero Omnibus Volume 4, Hideo is under the rule of a band of men that have weird, post-apocalyptic survival rules and have roosted at an outlet mall. But, Hideo must escape the men to find the sick and injured Hiromi, a teenage girl who can kill the creatures (called zqns), by giving them closure in their lives. I am A Hero Omnibus Volume 4 contains chapters 69-93 of this story, which makes it a total of 474 pages.

I Am A Hero Omnibus Volume 4 is a gruesome manga that reveals the gritty, disgusting aspects of a world without structure. While the zqns are basically zombies, what is more fascinating with this story is how it is akin to The Walking Dead, i.e. the people within the story are of greater importance here. The main character, Hideo, is shown as moral in a world that isn’t dictated by societal norms or specific rules. 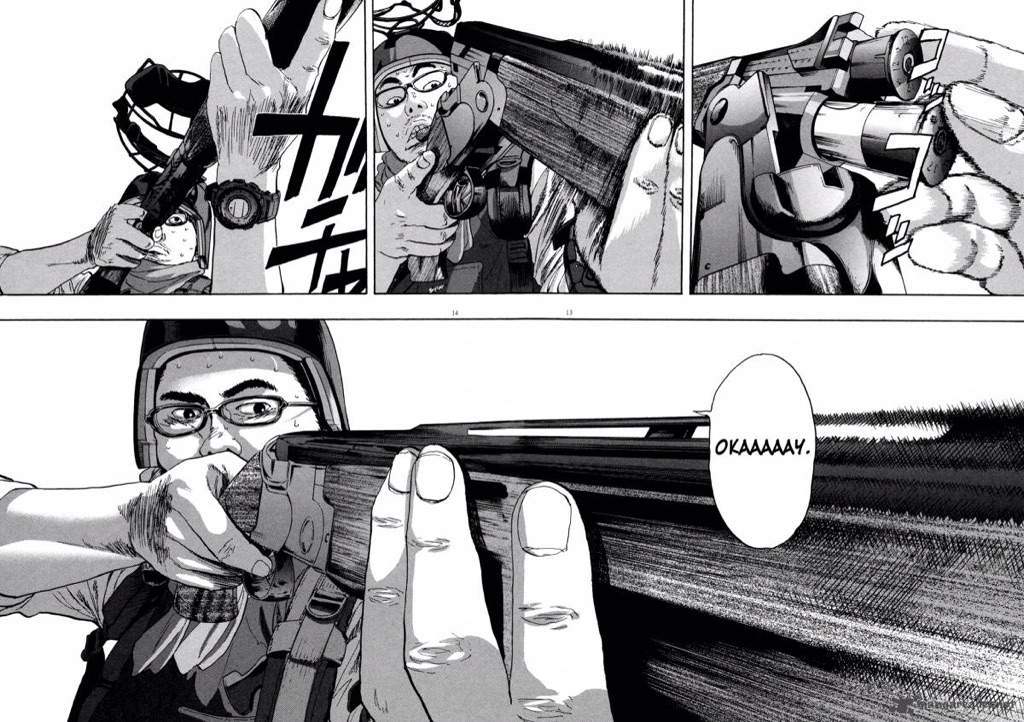 Rather than murder everyone in the odd group of people he has encountered, Hideo chooses to do the right thing despite any opportunities for personal gain. This approach is even more fascinating considering that, before the apocalypse happened, Hideo didn’t have to make such drastic decisions. The title of the series, I Am A Hero, really hones in on Hideo’s journey to become a hero in his own right. The other characters contained therein are also interesting, especially Hiromi, the infected teenage girl and Yabu Oda, a woman that is in the encampment.

The zqns, on the other hand, are completely horrifying, well drawn, and their character design is creepy as hell. In fact, I am glad that the manga itself is in black and white since in full color it would be properly terrifying. There are a couple of pages that are done in color to emphasize the zqn design, but that was honestly enough for me. This manga does horror and gore well and I highly recommend it for any horror fan–especially if you love zombies.

Post Views: 1,308
Liked it? Take a second to support Syl on Patreon! Why Fulci’s Zombie is the Distilled Essence of Zombie Cinema
March 9, 2018

Deathdream and the Horrors of War
May 7, 2016
FOLLOW US:
Support Syl on Patreon!
There are no goals in this campaign...