Last week saw the 31st anniversary of the original hit film Robocop. Fans reminisced about their favorite memories from the futuristic dystopia that was most definitely a product of Reaganomics. Now, fans have another reason to celebrate. Recently the entertainment news wires lit up with the news that MGM is looking to bring the future of law enforcement back to the silver screen and back to the crime ridden streets of old Detroit.

On July 11th, Deadline reported that MGM had partnered with director Neill Blomkamp of District 9 fame to begin working on resurrecting the robotic lawman. The outlet reported the new project is taking shape under the tentative title of Robocop Returns.

In an interview with Deadline Blomkamp heaped praise on the Paul Verhoeven original saying “The original definitely had a massive effect on me as a kid. I loved it then and it remains a classic in the end of 20th Century sci-fi catalog, with real meaning under the surface.”

According to Slate magazine, this newest installment is based on the script Robocop: The Corporate Wars by original screenwriters Ed Neumeier and Michael Miner which was written in 1988. Script revision is currently being completed by Justin Rhodes. Rhodes also has a hand in writing the forthcoming Terminator sequel as well.

Original screenwriters Ed Neumeier and Michael Miner will also be returning to the franchise as Producer and Executive Producer. The original Robocop tells the story of mortally wounded Detroit Police Officer Alex Murphy, who is resurrected by the conglomerate corporation Omni Consumer Products (OCP), and tasked with stopping the violence and corruption that runs rampant.

As a lifelong Robocop fan I was absolutely elated at the news! The chance to see one of my cinematic heroes again. Although, after the disappointment that was the 2014 reboot, I am inclined to proceed with caution.

Released to abysmal reviews and fan backlash, Robocop 2014 is but a small footnote most fans only mention in passing. With year long delays, the departure of director Darren Aronofsky for Black Swan and director Jose Padilha constantly fighting for creative control were all a recipe for disaster. Also the film was rated PG-13 to the ire of many fans.

Announced over 7 years ago, fans are also still waiting for the official unveiling of the Robocop statue in Detroit. In 2011 then Mayor Dave Bing asked citizens for ideas to help Detroit attract residents, tourists and business. In the tradition of the Rocky statue in Philadelphia, a Robocop statue was suggested. Mayor Bing quickly vetoed that idea but the seed had been planted and several fundraising sites began popping up for funding for the project. 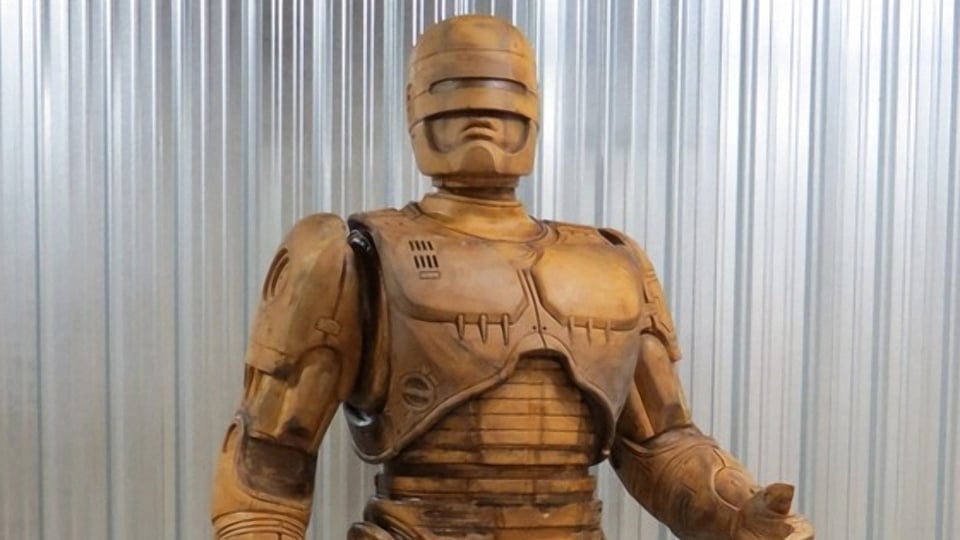 Plans initially were set to unveil the new statue in 2014 but was pushed back due to delays. Recently in May, the Detroit Free Press announced plans for an unveiling soon at the Michigan Science Center.

Director Neill Blomkamp has history of becoming involved with franchises that get stuck in development hell or never realized. At the beginning of this year Screenrant reported that Blomkamp had officially dropped his proposed Alien franchise sequel. We can only hope the same fate does not befall Robocop Returns.

Post Views: 260
Liked it? Take a second to support Aaron Posey on Patreon!

Tags: Ed Neumeier, Michael Miner, Neill Blomkamp, Robocop, sequel
Share This Post
Written by Aaron Posey
Hailing from the great state of Ohio, Aaron Posey was raised on a steady diet of Ghostbusters, Unsolved Mysteries, and classic slasher films. He possess a plethora of useless horror knowledge that he is dying to unleash on the world. He can carry on a conversation using nothing but movie quotes and can liken any situation to an episode of The Simpsons. He is always on the lookout for up-and-coming horror related bands and music. His crowning achievement in life is his brief appearance in the Halloween: 25 Years of Terror documentary.
Have your say!
00
Previous ArticleWhy Most N*zi Horror is Terrible (Unless it’s Puppet Master III)Next ArticleHereditary Isn’t Perfect, But We Should Still Be Glad It Exists
You May Also Like

Advance Review: Death Sentence London #1
May 15, 2015
FOLLOW US:
Support Aaron Posey on Patreon!
There are no goals in this campaign...