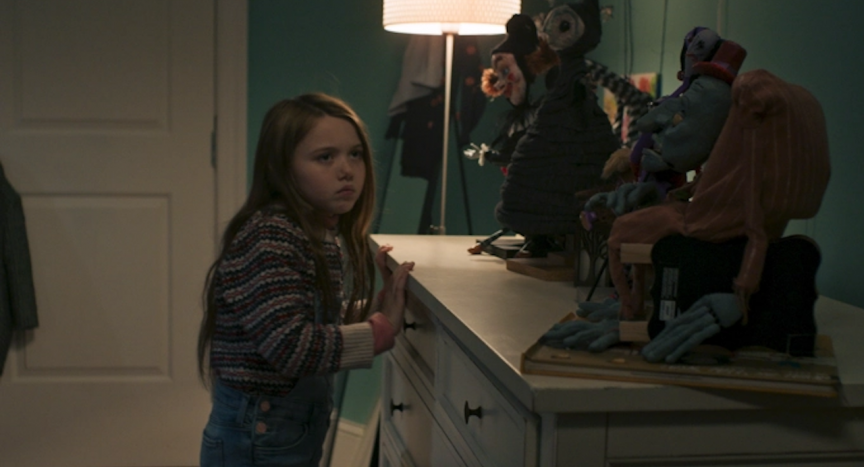 Separation is the latest creation from screenwriters Nick Amadeus and Josh Braun. Directed by William Brent Bell (known for The Boy and The Devil Inside). This is a horror film that shines a light on frightening aspects of the human experience. The flick focuses on the breakdown of family dynamics, and how that ultimately affects the children involved.

The plot revolves around Jeff (Rupert Friend) and his daughter, Jenny (Violet McGraw). Jeff is a formerly successful comic book artist. He now spends his days dreaming up new ideas that fail to come to fruition. His daughter often lacks supervision while her dad is working. Her babysitter often encourages and basks in his creative ideas instead of keeping an eye on Jenny.

Fed up with Jeff’s lack of drive and supervision of their daughter, which results in injury, his wife Maggie (Mamie Gummer) begins divorce proceedings. Backed by her wealthy father (and employer), Rivers (Brian Cox), it seems that Maggie stands to gain custody of Jenny and drop out of Jeff’s life.

Also See: Review: The Boy Knows When to Break the Rules

Things take a turn upon Maggie’s sudden death. Shortly after the funeral, puppets begin to visit both Jeff and his daughter. These are puppets that he created, known as the Grisly Kin. Jeff tries to get his life together to care for his daughter. At the same time, they both must confront the demons that come in ghost-like fashion via the puppets. Jenny believes one of these ghosts to be her mother, and it’s clear that Maggie’s spirit is not leaving until lingering conflicts are resolved. As a fan of psychological horror and creepy creations, I wanted to love Separation. After viewing the trailer, I was excited to watch. It appeared to be a film with the capacity to frighten, while also maintaining a deeper heartfelt storyline. Upon viewing, it felt a bit lackluster and disjointed in parts, and failed to deliver the expected punch.

There are solid bones to this film that provide a strong base. The cast, the heart and intention behind the story, and the horror aspects are there. For an independent film, the actors involved are well-known, and gave solid performances in past work. The standouts in this film were the young Violet McGraw, Mamie Gummer, and Brian Cox.

It’s clear that McGraw has a future ahead of her, especially in the horror genre. She’s believable and engaging as Jenny, and her performance invokes empathy from the viewer. Mamie Gummer and Brian Cox both portray rather unlikeable characters. They do it well, despite brief appearances onscreen. I’m a fan of Rupert Friend in his past projects, but less so in the role of Jeff. His reactions to the events around him seemed dulled and unrealistic.

With regards to intent, it’s obvious that there is heart behind the creation of this film. The screenwriters and the director clearly had a story to tell that goes beyond the scares, and I appreciate that as a viewer. Stories that focus on disappointments in life and the horror of humanity can be so cathartic. This film, with its focus on divorce and the aftermath, especially how it affects the child, is likely to reach a wide audience.

The horror aspect is also present, and it’s best done with the use of the puppets and dolls. I liked how these creatures were tied in with the comic book world and with Jeff’s own creations. This added a more personal aspect to the literal horrors in the film. There are certain scenes that were chilling. Seeing the smaller puppets on display, and the life-size creation of Maggie’s ghost— those were the moments that left me unsettled as a viewer. There were a few moments that just didn’t work for me and seemed a bit silly, such as the creature approaching Jeff from the attic, and effects that bathed some scenes in red. I think the latter was done to create an otherworldly effect, but it distracted by taking me out of the moment and diminishing some of the credibility of the haunting.

See Also: An Ode to the Lesser Known Killer Dolls of Horror

The pacing of the story started off with high intensity, and then dropped off until the third act. The first act is jam-packed with action, in an almost jarring fashion. The story progresses rather quickly from one conflict to divorce proceedings, to death and a funeral. It then lagged for a while, despite some of the haunting occurrences in Jeff and Jenny’s world. This led to some loss of investment as a viewer, and that was difficult to recover by the time the action ramped up again near the end.

Viewer connection to the characters could be enhanced through a bit more background at the beginning. We never see much interaction between Jenny and her mother other than when Maggie is enraged with Jeff. Without any heartfelt moments between the two, Maggie was painted as a cold character, and it seemed like she wanted custody out of spite. This, in turn, made it less believable that her ghost would linger around to protect Jenny after her death.

I went into Separation expecting a film that would make a lasting impression. Unfortunately it turned out to be a mediocre viewing. Despite the obvious heart behind the story, strong casting, and atmosphere, it lacked the spark needed to light my fire.

Separation is available in theaters as of 4/30. Advance Blu-Ray Review: Blair Witch is Too Focused on Recapturing the Magic of the Original
December 23, 2016