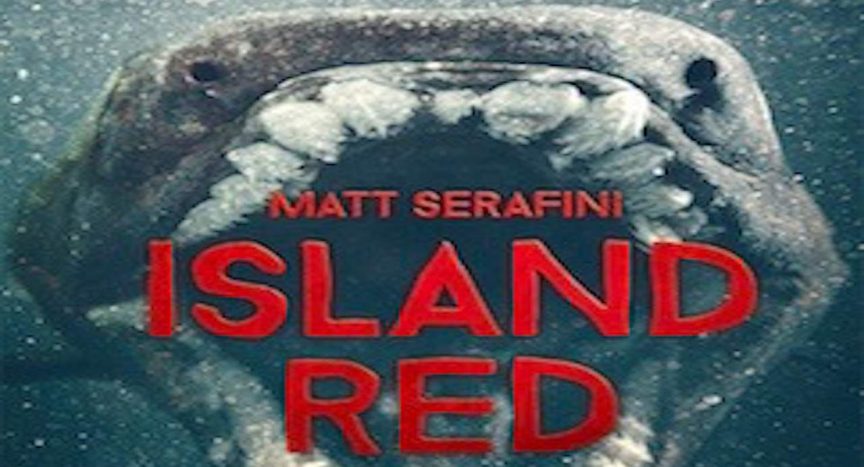 If you’ve ever wondered what a mashup of Jaws and The Thing would be like, author Matt Serafini has the answer. His latest book Island Red was released by Severed Press on July 2, and offers a quick and fun summer read that pays homage to some favorite horror classics. Serafini is a huge fan of the genre himself, contributing his writing skills to Dread Central and publishing several novels over the years. He also helped pen stories for an anthology book called All-Night Terror with Adam Cesare, which was just released on July 15.

A small island called Crystal Key is the setting for Island Red, where a meteorite crashes into the ocean. The parasitic alien inside of it attaches itself to a monster that is equally terrifying–a 20-foot frilled, serpentine shark that rarely ventures close to the surface. Soon the alien infects the inhabitants of Crystal Key, and several characters have to fight to stay alive against foes both on the land and in the water.

Thinking at first that this was just going to be an oceanic horror story about a shark, I absolutely love the way Serafini changes things up in just the first few pages of the book when a pair of doomed young lovers goes into the water for some sexy time at night. The attack doesn’t come from where one would it expect it to, and things from here on out become very interesting. The author combines two very different subgenres with ease, bringing his own ideas to each one in a way that works perfectly for the story. The isolation of the characters on the island becomes essential to the way everything plays out, and Serafini even adds in an impending hurricane to make things all the more dire.

Crystal Key is not without its share of drama among our characters. A young kid named Reggie is forced to go to the island to visit his father, Luther, who abandoned him and his mother. Hired muscle Manuel is searching for a missing girl with a dark past, but who also means a lot to him. Other somewhat shady characters further complicate things. I found myself often changing my mind about whether or not I liked some of these people, yet I was still shocked by what happens to them. With such a small cast of characters in a dangerous situation, you know that it is possible that some of them might not make it. Serafini is admirably not precious with his characters and makes it all understandable with the story he is trying to tell.

The horror elements are spot-on, and often very surprising. As a lover of aquatic horror scenarios, all the stuff with the shark attacks is right up my alley. There were plenty of scenes of underwater carnage to satiate me, but I have to contest that it’s the aliens that are the real star of the show. At about the midway point, they become more prominent in the story, and bring about some of the best and most gruesome imagery. The slug-like creatures invade their human hosts through their mouths, and control their minds and bodies. This introduces a little bit of body horror to Island Red. My favorite scene is one that involves two burnt bodies, and as I played it out in my head, I was really grossing myself out. Even little moments of gore had me squirming in my seat while reading, such as when one character bites off her own tongue.

Island Red is a fast-paced read at just 220 pages. The book feels like the author’s love letter to John Carpenter, as the story is very reminiscent of The Thing. Two characters in the book even share a bond through their love of Carpenter’s films. But Serafini puts his own stamp on the story, and gives readers a yarn that is energetic and entertaining, constantly keeping them on their toes. You can purchase the book now in print or for your Kindle here!

Post Views: 288
Liked it? Take a second to support Michele Eggen on Patreon!

Tags: alien parasite, aliens, Aquatic Horror, book review, books, books about horror, frilled shark, Island Red, jaws, Matt Serafini, Severed Press, shark, the thing
Share This Post
Written by Michele Eggen
In addition to contributing to Wicked Horror, Michele Eggen has been writing about all things horror at her blog, The Girl Who Loves Horror, since 2010. She loves anything having to do with ghosts or the supernatural realm. Her favorite films are Poltergeist and Child's Play.
Have your say!
00
Previous ArticleDead Bodies Being Found During Pokemon Go Play!Next ArticleMajor Supermodel Joins Flatliners Reboot
You May Also Like 10 Horrifying Kids Books That Are Not Actually Appropriate for Kids
January 8, 2016
Joey Keogh’s Top 5 Flicks To Watch On Halloween
October 26, 2015
Book Review: Something at the Window is Scratching Vol. 1 by Roman Dirge
July 27, 2015

Six Baffling, Unexplained Real-Life Paranormal Events
March 23, 2020
FOLLOW US:
Support Michele Eggen on Patreon!
There are no goals in this campaign...