Jerks and horror films go hand in hand. Almost any horror movie you can think of likely has a character that you are supposed to hate. This is separate from the main villain of the film. This would be the character that has such a tendency to get under your skin that you can’t help but wish for their most violent exit from said film. This spot in horror movie lore is reserved for the jerks, the douche-bags, the evil schemers; people so vile that even the killer of the film feels it necessary to do the world a favor and off them. Below are five of the worst offenders.

Coach Schneider from A Nightmare on Elm Street 2: Freddy’s Revenge

There isn’t much left to be said about the homoerotic overtones prevalent throughout Nightmare on Elm Street 2. The film’s cult following has only grown over time, inspiring people to reexamine and analyze the film in countless ways (which is only a good thing). One aspect that may tend to be overlooked due to his brief time in the actual film, though, is the irascible jerk Coach Schneider. A noted creep (and a secret leather daddy), Schneider spends basically all of his scenes calling his students “dirtballs” while getting some sort of steely-eyed gratification making his players power through sweaty, painful push-ups in the dirt under the scorching sun. He’s the kind of jerk who reminds you of Assistant Principal Vernon from The Breakfast Club, if he were an amalgam of that guy plus Buffalo Bill from Silence of the Lambs. It’s only mildly surprising when he is eventually discovered at an S&M bar. Then, of course, there is his notorious death scene in the school showers depicting an invisible Freddy Krueger lashing the coach’s bare butt cheeks with a towel before raking him to death with those infamous “knives for fingers.” You can’t help but get the distinct impression that screenwriter David Chaskin may have had some not-so buried anger regarding the oppressing patriarchy. Just a thought! 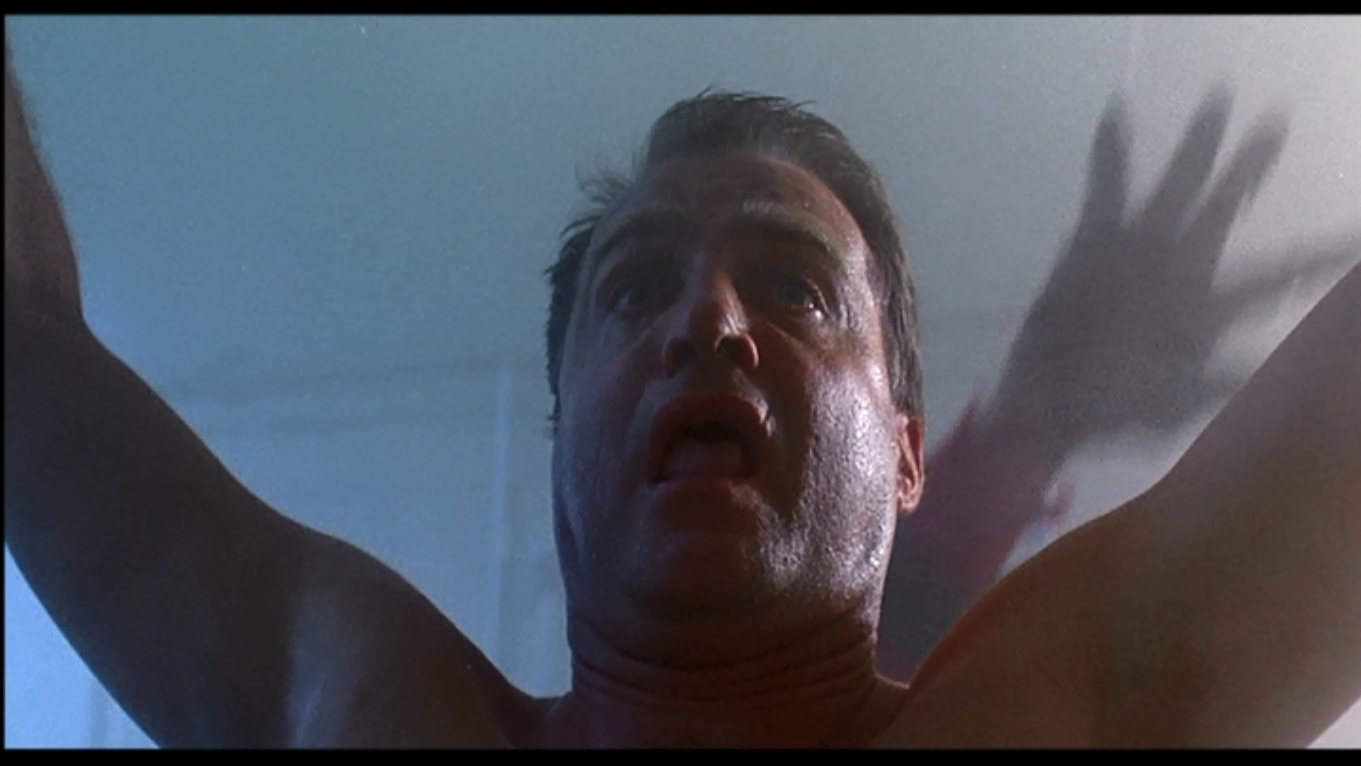 The most interesting thing about a character like Artie the molesting cook isn’t that he exists in the first place. Jerks in horror are not above being disgusting predators. After all, this era of horror played fairly fast and loose with its sexual misconduct. What’s most interesting is the ease with which his predatory proclivities are introduced. As the staff cook at a summer camp in the brilliantly macabre Sleepaway Camp, Owen Hughes has the dubious task of bringing this creep to life amongst a staff of either complete morons or utter scoundrels. Artie’s first big moment comes when he decides to expose himself to a young girl in the kitchen pantry. The big problem with that (other than the obvious) is that the girl is Angela. Angela has all sorts of issues stemming from her general sexual confusion. Admittedly, one of those problems is a penchant for torture and murder. So, when Artie the molesting cook is cleansed for his sins, it comes in the form of a giant…god damn cauldron of boiling hot water. The sight of his skin blistering and peeling is truly a horrid piece of business, but in keeping with character development, it felt earned. That’s strong writing! 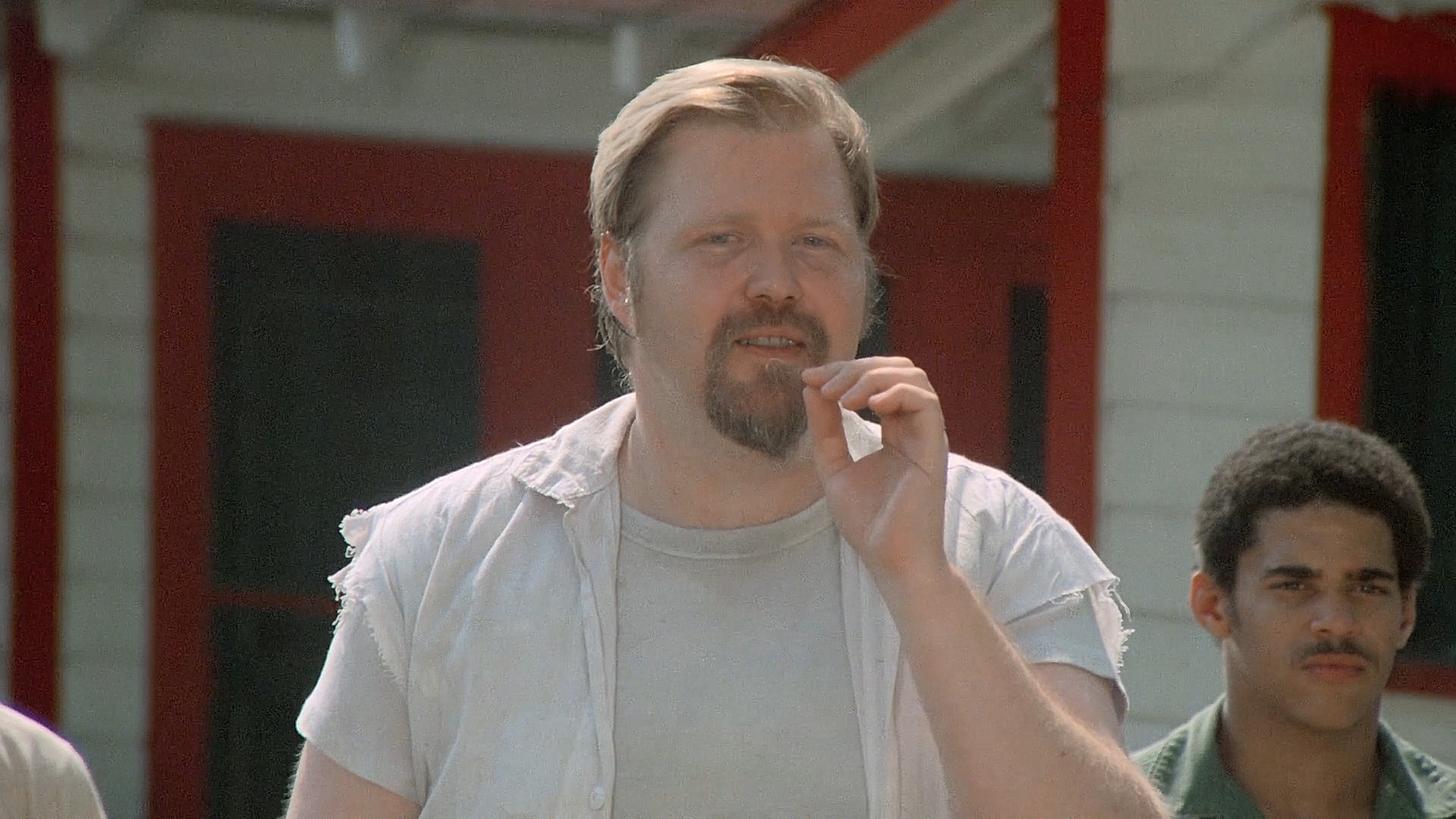 Harry Cooper from Night of the Living Dead (1990)

The original skeptical jerk, Harry Cooper in Romero’s immortal Night of the Living Dead was a tried-and-true jerk. His overt stubbornness and general selfishness created a perfect cocktail which could only be called, “We all can’t wait to see you be eaten alive.” However, in the somewhat questionable remake of that classic film, the character of Cooper (played with perfectly executed anti-charm by Tom Towles) reaches new levels of punch-able with the ever so carefully dolloped doses of racism and sexism portioned out for good measure. It’s not that the character changes all that much, though; the dynamic in the house of trapped, disparate souls remains more or less the same. It’s the air of entitled bravado and bad cologne smelling machismo that is crystallized so perfectly this time around that it could only have been properly portrayed in the modern, post-Wall Street era America. When Barbara finally wastes this dummy in the final moments of the film, it’s supposed to be a stark comment on the heartless nature that’s going to come along with living in this new world. Instead, though, it kind of plays out like when Ash was finally able to subdue and cut off his own demonic hand: utterly heart warming.

Wilma Northrup from the Creepshow Segment: ‘The Crate’

Horror anthology classic Creepshow is filled to the brim with all sorts of hateable jerks throughout its many stories. The fourth such entry, “The Crate” has always stuck out, though. The role of the nagging wife is nothing particularly interesting. It’s probably not much of a challenge to conjure up a horribly annoying shrill. In addition, it can also be kind of a broad and tasteless device. All the more triumphant then is Adrienne Barbeau’s power-drill-to-the-head caliber performance as Wilma (or Billie), Hal Holbrook’s disappointed, judgmental, condescending and all around garbage fire of a wife whom he eventually feeds to an abominable snowman. Because, sometimes, that’s what you do. Now, unlike other entries on this list, Billie’s end isn’t strictly justified. Sure, she’s annoying and emasculating, but is hardly deserving of such a grisly murder (or death at all). The only reason that her comeuppance isn’t as satisfying as it could have been is because her husband…is kind of an ineffectual loser and, also…a murderer. Let the record show, though, that every moment the character is alive, she is (practically) actively begging you to wish for her demise as soon as humanly possible. 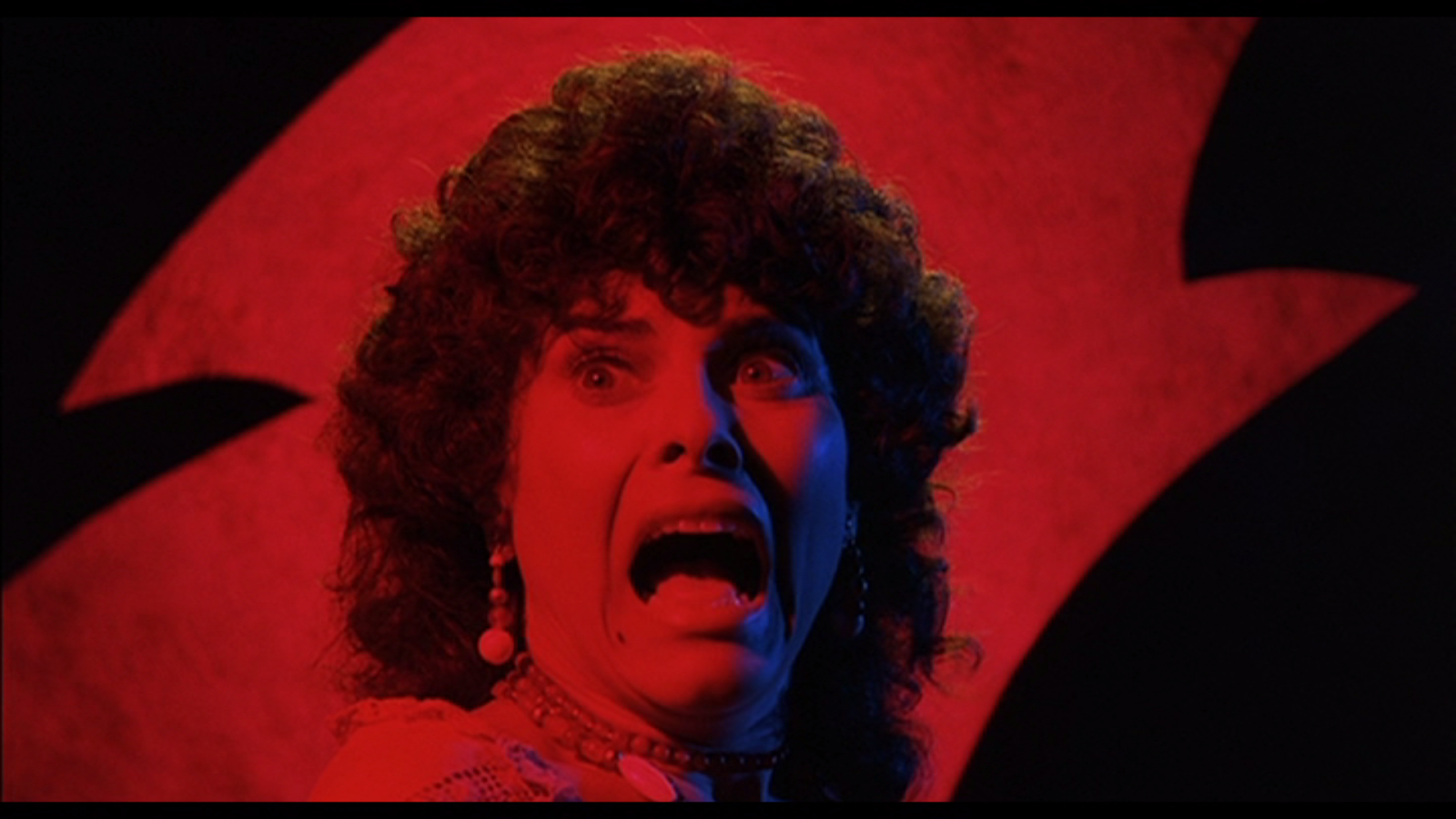 In the endless conversations between all of us horror nerds, there’s probably not enough said about the ghoulish hellscape that the Chiodo brothers’ out-of-the-box cult classic Killer Klowns from Outer Space so relentlessly portrays. This is likely due to film’s equally relentless goofy tone, but make no mistake–this is the stuff of nightmares. However, instead of focusing on man-eating shadow puppets, clowns luring 8-year olds to be brained to death by mallets, murders disguised as surprise free pizza deliveries (?!) and cotton candy cocoons; let’s talk about human Archie Bunker meme, Officer Mooney. Now, in true 80’s film fashion, Mooney represents the ruling class of jerks with all the charm of a feces-throwing baboon. He’s the old town cop and part of the older generation, so naturally John Vernon plays up his skepticism and distrust of youth to vomitous levels. He’s also kind of psychopath, who routinely batters his arrests and even lunges at the film’s female lead at one point. When he utters his infamous foreshadowing line, “You’re not gonna make a dummy outta me,” and is later made into the personal finger puppet of an 8 foot tall demonic alien clown, it serves as the kind of poetic justice that lacks any and all poetry. And it’s beautiful. 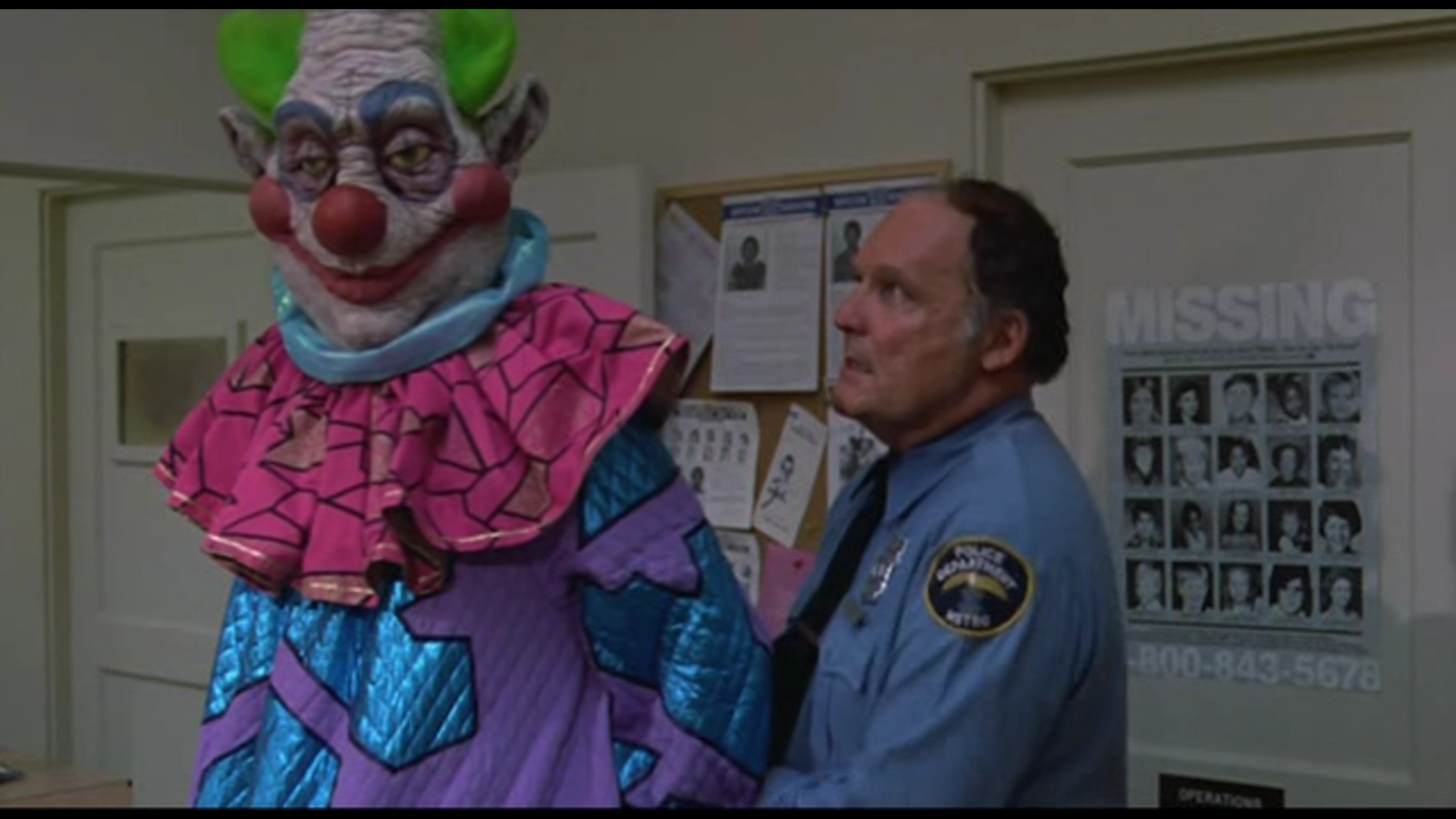 Post Views: 618
Liked it? Take a second to support Daniel Rivera on Patreon!

Not A Comedy, Not Unintentionally Funny, Just Groovy: Defending The Evil Dead As A Truly Scary Horror Movie
June 27, 2016
FOLLOW US:
Support Daniel Rivera on Patreon!
There are no goals in this campaign...